Why does Amandeep Sandhu write novels? To release the ghosts knocking under his rib cage? Admittedly. And much else adds up – attracted by the art of story-telling, prompted by the urge to delight his imagined reader, forced by the market’s monstrous hand. Paradoxically, despite a few avoidable, sometimes clichéd, musings on language and literary theory, the stock of additions includes a host of deletions that lurk spectrally under the printed words and make me wish, like a lover in fairy tales, for an undelete button that would be embedded somewhere in the novel. I dream of a publishing utopia in which the writer, like Marcel Proust’s ideal writer, does not have to be anxious about anyone’s approving eye.

Like his first novel Sepia Leaves (2008), this one too – his second – is a fruit of Sandhu’s struggle to come to terms with a difficult past. “My attempt to write this story,” he muses, “is an attempt to un-name it, flesh it out, maybe finally see it bound in the cover pages of a book" (30). This way of interspersing the narrative with reflection – etched out in the isolation of italics – in which the narrator frequently slips into his authorial self is also carried over from the previous novel. Essentially then, if the word is still usable, the novel, like its predecessor, is autobiographical. The dedication says it is for “the class of 1990” – Sandhu’s batch mates in a school in Kapurthala.  An autobiographical conversation in ink, into which the reader is drawn, to be implicated as a voyeur. The epigraph from Kabir prefigures a grim outcome: the outward voyage of quest turning into an inward revelation of evil deposited in layers in the frail pitcher of the self. 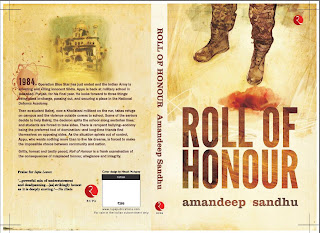 The novel is about growing up through teenage years in an all boys’ boarding school and is woven around Appu, the protagonist as the author’s see-through mask (which probably explains his sometimes incredible precociousness). But the personal narrative is caught in the tangle of history – when “the blood-dimmed tide” drowned the Punjab in the 80s. Sandhu’s election of phrases from W. B. Yeats’s “The Second Coming” to bestow poetically fraught titles to the chapters calls forth, in addition to the personal and the historical, a third dimension. This is the dimension of the prophetic, the messianic, the revelatory, which somehow does not unfold its potential. In fact, the historical and the personal too do not meld enough, in spite of the author’s invocation of metaphor to elevate the personal to the plane of the historical: for instance, the description of Operation Blue Star as an act of sodomy and the treatment of the rivalry between the junior and senior batches in school as a metaphor of larger political struggles do not illuminate much. The historical hangs there more like a backdrop, insufficiently animated by human truth whether fictional or historical. For me at least, the breath of fear that blows through Gulzar’s Maachis (1996), chilling your very bones, does not quite ruffle Sandhu’s pages. Perhaps this has something to do with his greater reliance on personal memory and testimony which, for fiction, may have serious limitations. More research and greater invention might have gone a long way to stitch the historical more seamlessly into the personal.

As for his treatment of a period of recent history that even today stirs great passions, it goes to Sandhu’s credit that he does not take sides even as he takes a clear, ethically defined, stance. Candour, ambiguity, understatement – he deploys each in the service of truth that is his concern in this work of fiction.

However, Sandhu does not quite make good his promise to revisit the scene of his escape with which the novel opens: “I ran away”. When the narrative returns to the moment when Appu had stared into the barrel of a gun, the reader does not sense any pressing urgency in his reactions, much less any terror to compel instant flight. Was the urgency an afterthought sparked by the author’s will to ‘novelise’ memory? Or does the author fail yet again to come to terms with the scene of his flight and would not relive that menacing, unforgettable brush with death? Should the latter be the case, its poignancy would be hard to bear.

The narrative is dipped in evil, and rightly so. But one wishes the introspective author-narrator had hauled his brooding meditations a little farther to lodge them in the human condition. That would have lent them a graver shelter and transported the novel to a different plane. The flashes of innocence in the constricted dark night of violence are also a little too faint to offer hope. Sexuality, when not tainted by evil, is sterile, with all its ‘gaiety’. The novel remains, moreover, too patriarchal, too masculinist.

But then Sandhu’s strength lies partly in facing up to evil. Not many contemporary Indian writers can inspect the corpse of a victim of extra-judicial killings the way Sandhu can:

I had never seen a dead body. Rigor mortis had set in and Joga’s body had bloated. His trousers were torn. The men found it difficult to straighten his broken legs. His naked back had purple welts. His tormentors had broken his fingers. One eye was dangling out of its socket. Caked blood had congealed on his broken nose and torn lips. (20)

One wishes that the courage of detail which the author displays here had been displayed on more occasions in the narrative. After all, one comes to such novels as this to be able to penetrate deeper into darkness.

The other side of Sandhu’s strength lies in casting and turning sentences that shine with a pearly brilliance:

One can nourish the spirit, keep the fire burning. But the fire can also burn the witness. (52)

Together the author’s two sides, complementary to each other, create a visionary chiaroscuro that may survive as a nugget of experience long after the dust of time has fallen upon memory and covered the trail dug by his story’s wheels. The story’s cart, though, moves at just the right tempo, suitably weighed down by the inertia of memory being dredged up and out. At a few places, but too few, it lingers on an object or a scene, such as where the author-narrator watches “rose-ringed parakeets and grey pigeons” that alight on his terrace for a morning feast of millet (2).

The birds return to the story as it comes to an end, but somehow the ending does not seem to alight with the grace of a free bird. It gives a sense of clipped wings, with a closure that appears too arbitrary. I wish it did not do that. But all stories have to come to an end, have to be put out. Maybe I wanted the story to go on and not abandon me so early. Perhaps I wanted to journey farther into the night, to taste the darkness more fully.

Popular posts from this blog

What's the Matter With Cultural Studies?

May 12, 2008
Mahesh Dattani ’s Final Solutions was first performed on 10 July 1993 against the backdrop of demolition of the Babri Masjid in 1992. It was the time when the spectre of Partition appeared to have returned, hungering for even more corpses. It seemed to be India ’s fate to live, if at all, with a gash in its soul. Dattani’s powerful and subtle play shows the problem of Hindu-Muslim relations as not inherently insoluble. It suggests that the real problem could well be with the limitations of prevailing discourses about those relations. Each discourse affords a generalized and one-dimensional view of the problem and is unable to address its specific complexity. If discursive boundaries could be ignored in an effort to comprehend the complexity of the problem, solutions might not be really far away. Reaching beyond politics and the social sciences, the play thus performs the quintessential act of literature in identifying the problem as simultaneously historical and psychological,
Read more

Rajesh Sharma
Patiala, Punjab, India
Writer, critic and translator. I teach literature, culture and theory in the Department of English, Punjabi University, Patiala. You can reach me at sharajesh@gmail.com.